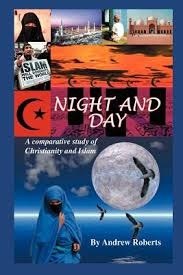 Night and Day: A Comparative Study of Christianity and Islam

NIGHT AND DAY
A Comparative Study of Christianity and Islam

Andrew Roberts has researched and updated a series of lectures on Islam for this project and has done a great service for those wishing a side-by-side comparison of Biblical Christianity and the religion of Islam. Quotatiions from the Qur'an are used abundantly so that the student ay have the facts of the case rather than the author's "interpretations."

In addiition to showing the fallacies behind most of the claims of Islam, Roberts lays a Biblical foundation for the truths of Christ's deity, the authority of actual scripture, testing a prophet, the need of a savior, and the plan of God for the salvation of men.

In his parallels and contrasts between the Bible and the Qur'an, Roberts leads one to see the power and wisdom of the one true Creator in providing an unmatched and unmatchable revelation of His will.

This is both a workbook and a commentary on Islam and its founder, Muhammad. Although it is divided into 13 lessons for a full quarter of study there is plenty of material for studying the subject in-depth for two quarters.