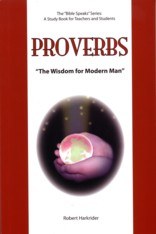 The original goal in preparing this workbook was to approach Proverbs in a verse-by-verse study, beginning with chapter one and continuing through chapter thirty-one. But as this approach was explored, it became increasingly obvious that since Proverbs has no definite pattern, the attempt to analyze each chapter by developing one central theme was an impossible task.

Proverbs is a collection of wise sayings; in fact, several different topics are sometimes put together back to back without any apparent reason for the subject matter to change. Furthermore, some proverbs are repeated in different places which means that some topics are introduced time and again without any analytical connection.

A topical study has been the most popular method of analyzing this book. Many teachers have brought this apparently disorganized mass of material into an accessible form by means of selecting specific topics and gathering proverbs from throughout the book. However, several proverbs do not fit into most major themes, therefore of necessity they are omitted from this method of approach. Besides, it is always best to read every scripture, word for word, line upon line.

The pattern we finally settled upon in developing this workbook was two-fold:

First, an attempt has been made in fourteen lessons to examine every verse. A general theme has been suggested around which a specific lesson could be taught as one surveys the book as a whole.
Next, we developed a topical approach for the last twelve lessons. This also provides a general review of Proverbs as several scriptures related to the same topic have been collected.
It is my prayer that every student will be refreshed by the practical wisdom for modern man that is contained in this treasure of Proverbs.

The Foundation For Real Knowledge, Introduction
The Guarantee For Success
A Recipe For Failure
The Way Of Wisdom Or The Way Of Folly
Anchors That Hold
A Fountain Of Life Is The Fear Of The Lord
A Merry Heart Is Like Good Medicine
Attitudes That Bring Either Sorrow Or Success
How To Have A Good Name
Things That Make A Person Great
Can You See Yourself?
Deliver Us From The Hypocrite!
Trust In The Lord And Be Exalted
A Woman More Valuable Than Anything Money Can Buy
A Man Who Obtains Favor Of The Lord
Children, Obey Your Parents
The Fear Of The Lord
Righteousness Exalts A Nation
The Tongue Has Power To Give Death
The Tongue Has Power To Give Life
Be Angry And Sin Not
Pride Goes Before Destruction
The Folly Of Laziness
How To Handle Money
A Good Neighbor Has Good Neighbors
Make Your Paths Level
190 pages. Workbook.