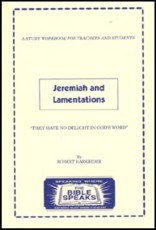 FOREWORD
The times in which Jeremiah lived were both exciting and trying. The nation had become exceedingly corrupt; idolatry and its attendant evils had robbed the people of practically all spiritual values and concepts. What few people held a semblance of faith toward God put that faith in the presence of the temple and the external rituals of the law, rather than true trust in Jehovah. Jeremiah lived under the reign of Judah's last good king, Josiah, who attempted a reform among the people, but it was primarily external; he did not get to the hearts of the nation. Josiah's rule was followed by that of four faithless and wicked men. The end was fast approaching. Babylon was on the march. Such times bring out the true greatness or baseness of one's character.

When Jehovah called Jeremiah to serve Him as a prophet, he shrank from the job; he would be excused. But the Lord was insistent; He needed a man who would stand for Jehovah and His word in the midst of all opposition, one who would stand, even though seemingly he would stand alone. Between forty and fifty years this man of God stood practically alone; yet he was not alone, for in his trying hours Jehovah was with him. In his faithfulness to a discouraging and disappointing charge, Jeremiah takes his place among the greats of God's faithful servants.

Let the student of this book look beyond Jeremiah's work and times and see the man himself and his God, for he will become an inspiration and a source of encouragement in the trying period of one's own life. God needs such men today: men who will stand in the midst of all obstacles. Become such a one. Thank you, brother Harkrider, for bringing forth this work-book in a time when Jeremiah's message is so sorely needed. May God reward your labors.

Lesson 1 - Jeremiah, An Example For Men Of God
Lesson 2 - Jer. 1
PART I: PROPHECIES DURING THE TIME OF JOSIAH, JEREMIAH 2-20