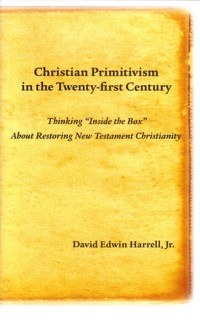 Christian Primitivism in the Twenty-First Century: Thinking "Inside the Box" about Restoring NT Christianity

From the Introduction:
"The belief that local churches can be and should be uniform in organization, worship and work in every age, sometimes referred to as 'restorationism' or 'primitivism,' has been challenged throughout Christian history... Inevitably, and properly, many ...Christians who have grown up in churches of Christ feel that they must ponder the basis of their personal religious commitment rather than accept the traditional practices handed down to them."

"The stylish mantra of late urges the next generation to 'think outside the box.' I am convinced that a large percentage of the people who voice such challenges have very little understanding of what is 'inside the box.' The box of New Testament primitivism contains far more than seemingly legalistic arguments about instrumental music and sponsoring churches...the idea of restoring New Testament churches, of modeling ourselves on primitive Christians, is a profoundly biblical, richly textured concept with deep historical roots...Along with generations of serious Bible-believing Christians before me, I have found no better gyroscope for life than to seek to find and follow the 'ancient order of things.'"