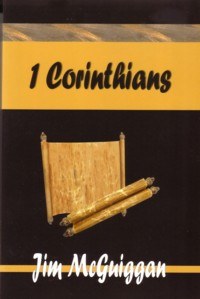 There are many fundamentally important things to be learned from the I Corinthian letter. We learn that an assembly of God's people is, in practice, quite different from what we wish it to be. The Corinthian congregation was a wild and woolly assembly, but their basic problems are the very same problems we face in assemblies of disciples today. This makes the I Corinthian epistle especially helpful to us today. We can learn a lot from Paul as he attempts to "save again" an assembly which he began and which just about broke his heart.