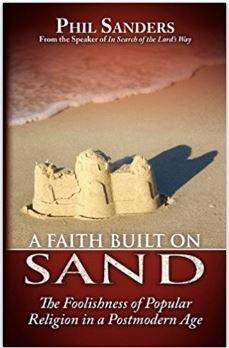 A Faith Built on Sand

A Faith Built on Sand:The Foolishness of Popular Religion in a Postmodern Age

Is your faith built on the Rock or on Sand? Jesus' parable about two houses, one built on a rock and the other built on sand, has provided encouragement and warning for students of God's Word. In Phil Sanders' newest book, A Faith Built on Sand, he examines the dangers inherent in a faith that has no foundation more substantial than sand. Sanders confronts such current movements and positions as society's influence on Christianity, cultural morality, tolerance, the emerging church and synthetic Christianity. He explores the flaws evident in each of these when compared with God's inspired Word. He insists the only viable solution to this sand-based faith is finding your way back to the cross.