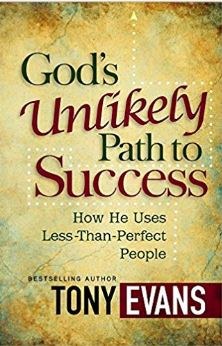 HOW HE USES LESS THAN PERFECT PEOPLE. IT'S TIME TO GET ENCOURAGED ABOUT HOW GOD WANTS TO USE YOU..

When many Christian readers think of the heroes of the Bible, they think about how "good" they were. They forget that….

Rahab was a harlot.
Jonah was a rebel.
Moses was a murderer.
Sarah was a doubter.
Peter was an apostate.
Esther was a diva.
Samson was a player.
Jacob was a deceiver.

And yet these eight men and women are among the Bible's greatest heroes.

Dr. Tony Evans uses these prominent Bible characters to illustrate the truth that God delights in using imperfect people who have failed, sinned, or just plain blew it. These are men and women whose actions?or reactions?were not consistent with God's character?and yet God met them and used them in the midst of their mess.

Readers will be encouraged about their own walk with God as they come to understand that He has them, too, on a path to success, despite their many imperfections and mistakes.