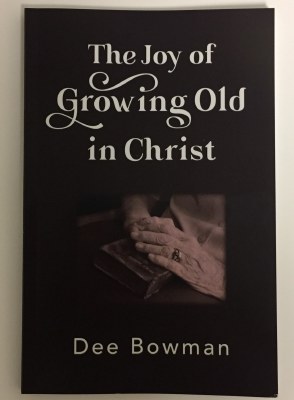 The Joy of Growing Old in Christ

Aging often produces some limitations as to what a person might do. But aging dos not mean that a person cannot do anything. Peter Roget invented the thesaurus at age 73. His collection of synonyms and antonyms was not the first to appear, but his was far better organized than others' previous efforts. Grandma Moses took up painting at age 76 because arthritis had crippled her hands so she could no longer embroider. Three years later, her art was hanging at the Museum of Modern Art in New York. Comedian George Burns said, "You can't help getting older, but you don't have to get old." Age is just a number.
So believes evangelist Dee Bowman, who has preached the good new2s of Christ across America and abroad for well over fifty years - and is still preaching. He has his own limitations which dictate that he should not continue the rigid schedule he once managed. But he is still actively engaged. And he is sure that others, as they age, can be equally involved in serving the Lord as Christians.
Thus, this book, The Joy of Growing Old in Christ, has come into being. He maintains that growing old can be a joyful experience for every Christian who will accept it with a willing mind. He writes of the joy that comes from being in Christ; the joy of a married couple as they grow old together; of continuing to grow in knowledge of God's word; of going on, enduring, and finishing well (and much more). As you read it, you will be stirred by a fresh perspective on serving the Lord toward the end of life's day.